Once you’ve identified yourself to a system, you must prove that claim of identity. That’s where authentication comes into play.

The strength of techniques used by each of these authentication factors may be measured by the number of errors that it generates.

There are 2 basic types of errors:

The solution to this issue is to combine authentication techniques from multiple factors. This is known as multi-factor authentication.
Some examples include:

EXAM TIP: you will likely find a question on this in the exam. Make sure to pick an example that uses techniques from 2 different factors.

Traditionally organisations implemented Something You Have authentication using physical tokens like this one pictured:

They’re small hardware devices that the user typically carries on a keychain. When the need to authenticate arises, the user first provides a username and password, satisfying the something-you-know criteria. The system then prompts the user to provide an authentication code. The user pulls out his or her token and presses the button. The token then displays a code that the user enters into the system, proving physical possession of the token and completing the authentication sequence. The cost of providing thousands of users with physical tokens can add up quickly.

The rapid spread of smart phones led to the adoption of soft-token technology. Soft tokens are simply apps that run on a user’s smartphone, such as the Google Authenticator app. Soft tokens generate a constantly changing series of codes. When an authentication system prompts the user to enter a code from the token, the user simply opens the app and reads off the current code.

There are two different protocols for generating these codes:

This is another way of providing Something You Have. We discussed these previously.

One of the most common applications of password security is to secure virtual private networks and other remote access technologies.

This is the earliest of these protocols. In this protocol, the client wishes to authenticate to a server, and both the client and server know the user’s password.

The client simply transmits the username and password to the server, and the server validates the password. That’s about as simple as it gets and successfully implements password authentication. But there’s one major flaw to this protocol. PAP does not use any encryption to protect this communication. Anyone able to eavesdrop on the connection can read the username and password right off the network. For this reason, PAP should not be used, except under circumstances where the transmission is encrypted by other means.

In CHAP, both the client and the server have prior knowledge of a shared secret. Neither wishes to transmit that secret over the network, because it would compromise the security of the system. Instead, they work through a process where they prove to each other that they both know the secret without actually exchanging the secret value over the network.

Here’s how it works. Once they establish the link, the server sends a random value to the client. This is known as the Challenge value. When the client receives the challenge, it combines the challenge with the secret and computes a cryptographic hash of the two values. This hash is irreversible, meaning that it is not possible to retrieve the input if you have the hash output. The client then transmits the hash value to the server. This is known as the Response value.

The server receives the response and stores it in memory. The server then computes its own hash value by using the same hash function on the challenge it sent to the client and the shared secret that they both know. The server then compares the response it computed with the response received from the client. If the two values match, the server knows that the client’s secret is identical to the server’s secret. And it authenticates the client without ever having to send the actual secret password over the network. CHAP is a much more secure alternative to PAP and an acceptable technology for use in modern secure applications.

Microsoft created their own version of the CHAP protocol and called it MS-CHAP for Microsoft CHAP. They later released a second version of the protocol called MS-CHAPv2. It’s important to note that security researchers have found significant vulnerabilities in both versions of MS-CHAP, and these protocols are now considered insecure.

Identification and authentication can be an annoying process for end-users, and difficult to manage for organizations. The concepts of Federation and Single Sign-On seeks to reduce some of this burden.

SSO goes a step further and shares authenticated sessions across systems. In an SSO approach, users log on to the first SSO-enabled system they encounter, and then that logon session persists across other systems until it reaches its expiration time. If the organisation sets the expiration period to the length of a business day, it means that users only need to logon once per day, and then their single sign-on will last the entire day.

Shibboleth is an example of an SSO that was created by Universities to resolve their identity management issues.

Trust relationships across different authentication domains are described in terms of their direction and their transitivity.

One of the most common access control needs is for an organisation to have a centralised approach to network and application authentication, authorisation and accounting.

As the name implies, RADIUS was first used to authenticate the users of modem-based dial-in services back in the 1980s and 1990s. A centralised RADIUS server could support modem pools located around the country, providing a single point of administration for password and account management, and consolidating accounting records in a centralised location.

RADIUS is used today to allow many diverse applications to reply upon the same authentication source. Here is an example of a successful RADIUS authentication on a wireless network.

This is an alternative to RADIUS and performs a similar function. First developed in the 1980’s there are two early versions of TACAC rarely used today. The current TACACS standard is the TACACS+ protocol developed by CISCO. It has two improvements over RADIUS:

The Kerberos access control system is widely used to implement authentication and authorisation systems on both UNIX and Windows platforms. It is one of the core protocols underlying Microsoft Active Directory. Kerberos is a ticket-based authentication system that allows user to authenticate to a centralised service and then use tickets from that authentication process to gain access to distributed systems that support Kerberos authentication.

There is a good video explaining Kerberos here: https://www.youtube.com/watch?v=2WqZSZ5t0qk

LDAP is an important protocol to access control. It allows services on a network to share information about users and their authorisations in a standardised, open format. Active Directory uses LDAP in combination with Kerberos. While Kerberos handles authentication, LDAP provides the means to query information stored in the directory service.

This is the older windows authentication, pre Kerberos.
– Was widely used on many Windows systems
– Depends on a hash based challenge response protocol
– Has serious security vulnerabilities-Weak Encryption
– Pass the Hash: allows the use of credentials from one system to gain access to another system

Avoid the use of NTLM!!!

There are three actors in a SAML request:

These protocols provide a federated single sign-on experience for the web.

This doesn’t actually authenticate, it authorises. It is a protocol designed to work across a variety of web services.

In this example we will login to the training site Lynda.com using LinkedIn credentials

This is an identification and authentication protocol designed to work with Oauth. 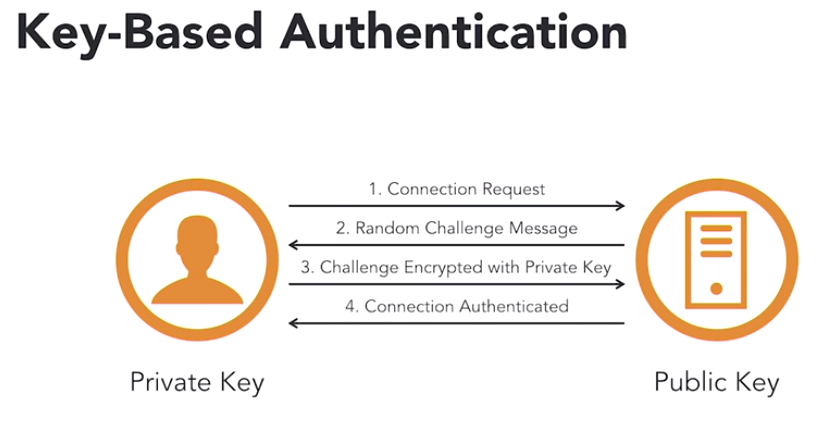 When you want to use keys for encryption, you first create a public/private key pair. You retain the private key as secret knowledge, and then share the public key with the server you wish to authenticate to.

This provides basically the same level of protection as a strong password, but the major benefit of key-based encryption is that it can be automated. One server can connect to another using certificate-based authentication without someone entering a password.

Setting up a server with key based authentication