In 2000 a man hacked into the sewage system in Maroochy, Queensland, and released millions of litres of raw sewage into local parks, rivers and even the grounds of the Hyatt Regency hotel.
This was a revenge attack as his job application was rejected.
https://www.theregister.co.uk/2001/10/31/hacker_jailed_for_revenge_sewage/

Embedded computers are now part of our everyday life. Smart technology is everywhere. Smart devices are computer controlled and connected to the network.

Together these devices are known as the internet of things (IoT).

In 2015 hackers took control of a Jeep Cherokee (in an experiment). They were able to control the AC, on board entertainment system, and even the acceleration and brakes.
https://www.wired.com/2015/07/hackers-remotely-kill-jeep-highway/

Regularly update the Smart device software
Some devices have automatic updates that install without the users knowing or intervention. But some are manual and require that the user check for updates and download them when available.

Security Wrappers
In some cases it is not possible to patch the systems for a known vulnerability. In these cases you can use a security wrapper. In this approach the device does not have direct access to the network but instead it is reached through the wrapper system that monitors input and output and only passes vetted requests from network systems. It is like a mini firewall for the embedded device.

Place untrusted devices on their own network segment. This way they have no access to trusted systems.
Exam tip: this is the most important control you can put in place for embedded devices 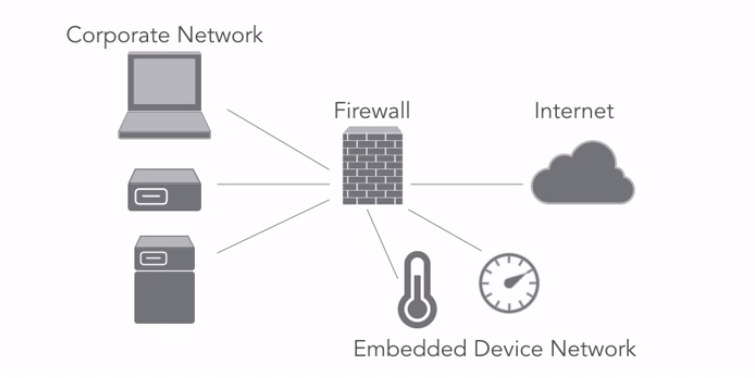 Air gapping take network segmentation to the extreme degree and it is appropriate for use in the most sensitive cases, such as the control system for a nuclear reactor or other situations where there are life safety issues at stake. An air gap for a network means that there is no connection between the air gapped network and any other network. If a user needs to access the air gapped network they have to physically visit a machine on this network.

Embedded systems that have web interfaces are susceptible to many of the same web applications attacks that we find on more complex systems. They can be vulnerable to SQL injection, buffer overflows, and cross-site scripting attacks. Application firewalls, when placed in front of these systems, monitor inbound traffic for signs of malicious activity, and when they detect this type of hostile traffic they can block it before it reaches a potentially vulnerable embedded device.

There are 2 main types of embedded systems: