This is the first SDLC developed in the 1970’s by Winston Royce. The waterfall Model illustrates the software development process in a linear sequential flow. This means that any phase in the development process begins only if the previous phase is complete. In this waterfall model, the phases do not overlap

This approach does allow for movement back to an earlier step, but only one phase at a time. EG: if software fails in the testing phase, it goes back to the code and debug phase for more testing. This process is very rigid and doesn’t allow for many changes to the software while development is in place.

If a business unit identifies a desirable new feature halfway through the coding process, there is no opportunity to modify the design. Because of this, there aren’t many modern software development shops that embrace the Waterfall model.

This was designed in the 1980’s by Barry Boehm. The Spiral Model has four phases, a software development project repeatedly passes through these phase in iterations called Spirals. 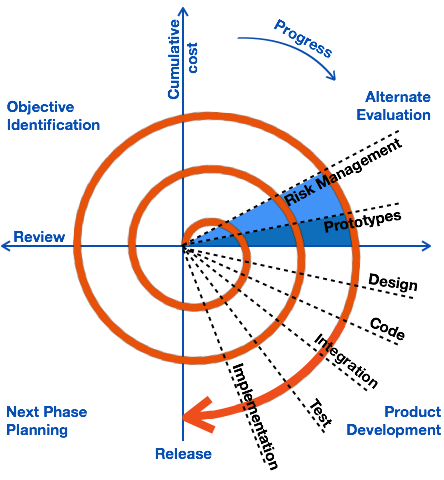 Agile SDLC model is a combination of iterative and incremental process models with focus on process adaptability and customer satisfaction by rapid delivery of working software product. Agile Methods break the product into small incremental builds. These builds are provided in iterations. Each iteration typically lasts from about one to three weeks. Every iteration involves cross functional teams working simultaneously on various areas. 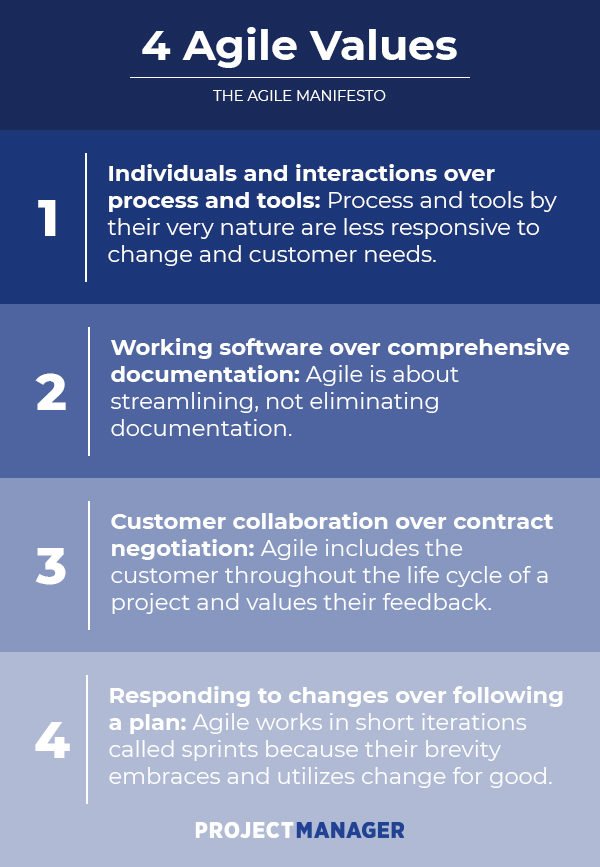 Maturity models provide a way for an organisation to evaluate themselves against a standard benchmark and identify the next steps in evolving their software development practices.

This helps the organisation identify where they are in the maturity model. It consists of 5 different levels: 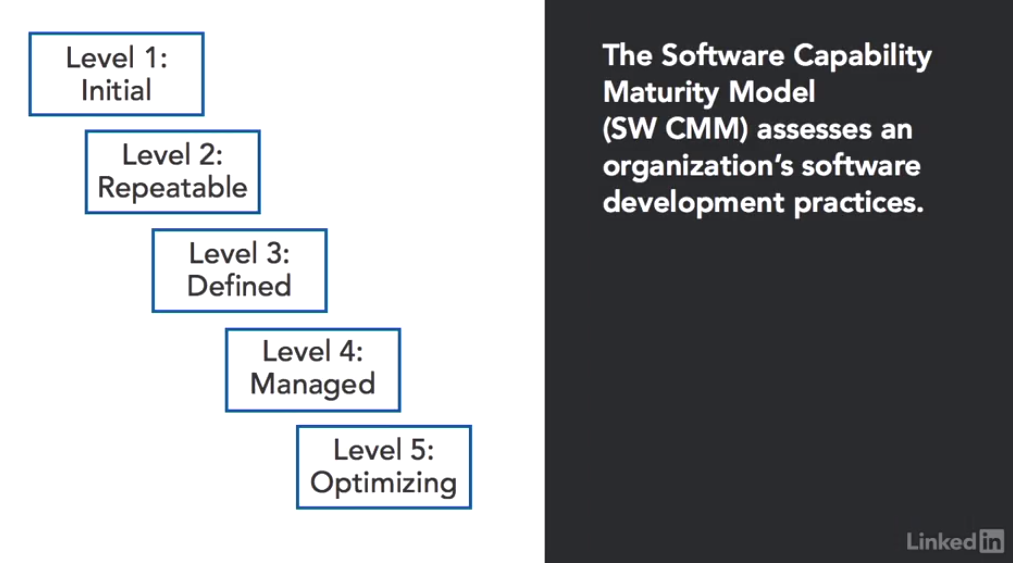 Level 2 – Repeatable: Some key activities that happen at this stage:

In this phase, the organization might have some basic processes such as reusing code between projects.

Level 4 – Managed: This uses quantitative measures to evaluate their progress and understand the effectiveness of their practices.

Level 5 – Optimising: This using continuous process improvements to strive to always get better.

IDEAL serves as a kind of roadmap for initiating, planning, and implementing process improvement actions. It is a process-improvement and defect-reduction methodology.

The IDEAL model is named for the five phases an organisation runs through in performing a change initiative: Initiating, Diagnosing, Establishing, Acting, Learning.

Initiating — Lay the groundwork for a successful improvement effort:
Typically the Initiating phase is the direct response of some stimulus showing a need of urgency to change the current way of doing business. In return to this stimulus, the appropriate sponsorship is established, and the appropriate resources are allocated.
Diagnosing — Determine where you are relative to where you want to be:
In the Diagnosing phase, a kind of analysis is performed to baseline the current practices and to probe potential improvement opportunities. For the CMMI Product Suite this is a SCAMP Appraisal, for ISO 15504 an assessment.
Establishing — Plan the specifics of how you will reach the objectives:
In the Establishing phase, the recommendations of the analysis are prioritized, change implementation teams are established, and plans are developed to conduct the activities.
Acting — Do the work according to the plan:
In the Acting phase, the planned activities are implemented.
Learning — Learn from the experience and improve the ability to adopt new improvements in the future:
During the Learning phase lessons learned are collected that can then be applied to subsequent rounds of the IDEAL change cycle.

Once software is developed is moves into this phase. During this phase, organisations should follow standard change management procedures that avoid unnecessary disruptions and control the flow of code to production. Software is never finished. Once the development process has concluded, the organisation is still responsible for maintaining that code until it is decommissioned. If a software is developed for internal use the developers will likely have requests from internal customers to fix bugs, add enhancements etc… If the software is for external customers they will more likely be more demanding with their requests.

This is one of the most important processes an organisation must put in place. This should consist of 3 key elements:

This merges two worlds: Software Development and IT Operations.

Software developers are responsible for writing the code, building the applications and integrations that meet the requirements of the customers and business. Developers need to rapidly release code to meet these demands.

IT Operations staff are responsible for maintaining the infrastructure and keeping the IT environment stable. They are often wary of change because change brings the possibility of instability.

The DevOps movement seeks to bring these tow disciplines together in a partnership.

IaC is the process of replacing manual processes and standard operating procedures to configure hardware devices and Operating Systems with scripts/code/applications that will automatically manage and provision the hardware and OS. IT is also known as Software Defined Infrastructure.

The main purpose of a code repository is to store the source files used in software development in a centralised location that allows for secure storage and the coordination of changes among multiple developers. They also provide version control allowing the tracking of changes and rollback of code to previous versions.

Code repositories also meet the needs of security and auditing professionals who want to ensure that software development includes automated auditing and logging of changes.

Code repositories promote code reuse. Developers seeking code to perform a particular function can search the repository for existing code and then reuse it rather than starting from ground zero.

Code repositories also help avoid the problem of dead code where code is in use in an organisation, but nobody is responsible for the maintenance of that code, and in fact, nobody may even know where the original source files reside.

These consist of shared code objects and their related functions. Instead of having to write the code to perform every details function, developers can simply locate libraries that contain the relevant functions and then call those functions.

These are collections of software libraries combined with documentation, examples and other resources designed to help programmers get up and running quickly in a development environment.

The following page is the Facebook SDK for iOS development: https://developers.facebook.com/docs/ios/
It includes a guide, getting started instructions and documentation. There are a wide variety of functions to help developers use Facebook login, let people log into applications using only their phone number, help people share things and send messages on Facebook.

This is a way of making services available to developers (that didn’t develop the software) instead of providing them with the actual code. EG: Twitter offers an API that allows developers to interact with the Twitter service.

Code signing provides a way for developers to demonstrate to end users that the applications are from a legitimate source. Digital signatures may be used for code signing.

This is a set of design principles that database designers should follow when building and modifying databases. Databases that follow these principles are set to be in normal forms.

Exam tip: you should know the general idea of normal forms

Information at rest in a database should be protected with strong encryption. This prevents someone with access to the database table from reading the sensitive information stored in that table unless they also have access to the corresponding encryption key. Encryption also helps prevent accidental data exposure cases, when database contents are inadvertently disclosed to unauthorized individuals.

It is good practice not to name your database server “Credit Card Database” or something like that. Use a little strategy in your naming convention and don’t point attackers directly at your sensitive information.

Stored Procedures store the text of query on the database server and then allow applications to simply provide the arguments instead of the entire SQL command. If implemented correctly, stored procedures are an effective control against SQL injection attacks.

There are 2 main activities that happen in software testing:

This is the final phase in software testing. This is commonly referred to as Beta testing. Once developers are confident that the software is correct and ready to move to production, they turn it over to end users for their evaluation under real world circumstances. This is usually done in a testing environment where users are asked to simulate real world transactions without actually altering production data.

After code is released developers often make minor and major changes to fix bugs discovered and add new functionality. Before releasing these modifications they conduct regression testing to verify there are no unintended side effects.

During a code review, developers have their work reviewed by other developers who examine the code to ensure that it does not contain obvious or subtle security issues. This can be formal, informal or somewhere in between.

This is a formal code review process –

Most organisations use a less formal review process

Synthetic transactions are scripted sets of inputs and instructions that are given to code when the testers know what output the code should produce for each input.
Testing software can automatically cycle through these synthetic transactions to verify that the code is functioning properly across a wide variety of tests.

EXAM TIPS: code reviews, static testing, dynamic testing are complimentary to one another. They are not competitors. They each have a different function.

Fuzzing is a software testing technique that feeds software many different input values in an attempt to cause an unpredictable state (crash the software) or unauthorised access (disclose confidential information).

There are 2 main methods for executing code: