Basic function of a firewall: 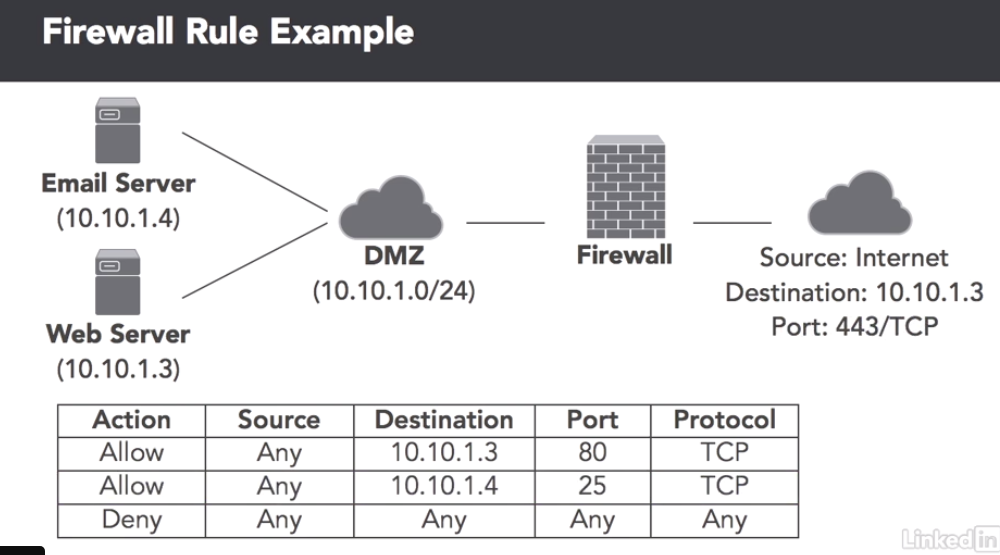 Firewall rules work from top to bottom, i.e.: checks the traffic against rule 1, then rule 2 etc… until it is eventually allowed through or it gets blocked.

In the example above they are trying to block access from the internal network to a malicious server (IP:1.2.3.4). But if the rules are in this order it will never get blocked because the rule above says allow all traffic to the internet. This can easily fixed by re-arranging the order of the rules:

These are rules that allow more than necessary. There are a number of reasons promiscuous rules could be in place:

These occur when a system or service is decommissioned but the rules for these systems are never removed on the firewall.
EG: the organisation has a server behind a firewall that is accessible on port 80 from the web. The server is then decommissioned but the rule is left in place. The danger is that the IP that the server had could be reused for something else, then whatever has that IP is open to the web.

Routers often sit in front of network firewalls and can perform basic filtering that can reduce the load on the firewall.

Extended Access Control Lists: these perform filtering based upon more advanced criteria, such as:

There are a number of differences between firewalls and routers:

If an attacker has physical access to your switch they can control that portion of the network (i.e.: take it offline or mess with it).

In this the attacker sends thousands of SYN requests to the target system in an attempt to consume enough server resources to make the system unresponsive to legitimate traffic.

Defending Against These Attacks: Flood Guard Protection works by controlling the number of open connection each source system can have

Defending Against These Attacks: Port Security helps prevent MAC flooding as the switch only learns the MAC addresses of certain devices.

These occur when there are 2 or more physical paths between two network devices and the devices begin broadcasting traffic in a loop to each other.They can quickly consume all the network resources and allow no capacity for legitimate end users.

Preventing Routing Loops: the Spanning Tree Protocol helps prevent these loops. STP blocks the port of there is a loop, but then unblocks the port if it is needed (in case the other port to the network device fails).

Log files can be very useful for investigating network issues.

This is like a skimmed down packet capture. It is sort of like an itemised phone bill, it doesn’t show the actual communication, just the summary of the details. It tells you:

Going through log files can be a tedious task. Usually this involves logging on to different servers or switches and going through the logs. But SIEM systems can automate a lot of this. They compile log files from a lot of different sources, including:

You can then filter through the compiled log files to find what you are looking for.

This provides administrators a means to centrally monitor and configure devices.

The SNMP Agent is a piece of software that runs on the managed device (server, switch, firewall, router, etc…) and allows it to communicate with the SNMP service. Most often the agent is built into the network devices software.

The Network Management System is the central system that communicates with the SNMP agents. This is the server that they send their information to. It reaches out to the agents (sends a Get Request) on a periodic basis and requests the information it is configured to receive. The agent then sends this information back (SNMP Response).

The Network Management System can also (if configured to) send some configuration settings to the agents. This is called a Set Request. The agent will then send an SNMP response back saying if the configuration was successful or not.

This is the latest version and should always be used as previous versions have known vulnerabilities (including sending passwords in plain-text).

Storage networks are used for bandwidth intensive communications between computing systems and the storage arrays attached to them.

Larger storage needs require the use of SAN’s. These are massive arrays of storage devices that serve networks with very large storage requirements. SANs present raw storage to devices rather than file systems. The Operating system can use it as it wishes. SANs are connected using dedicated storage networks.

Storage networks carry sensitive information often in unencrypted form. Storage should be carried on a dedicated network or use a separate VLAN that has careful trunk management to ensure it is only available where it i absolutely needed.