DES uses an encryption operation called the Feistel function for 16 rounds of encryption.
In this diagram below you can see the plaintext enters the top and is run through Feistel (F boxes) 16 times, then at the bottom emerges the ciphertext.

Each of these F boxes that implements the Feistel function, takes half a block of input, or 32 bits, and combines it with a piece of the 56-bit encryption key. Then the output of that function is broken up into eight segments and fed into eight different functions called S boxes, these yellow boxes labelled S1 through S8 in the next diagram. S stands for Substitution and each one of these boxes contains a different substitution cipher. The results of all of those substitutions are then combined back together again and fed into a P box. P stands for Permutation which is just another term for transposition. The output of all of those S boxes is scrambled up to produce the cipher text. 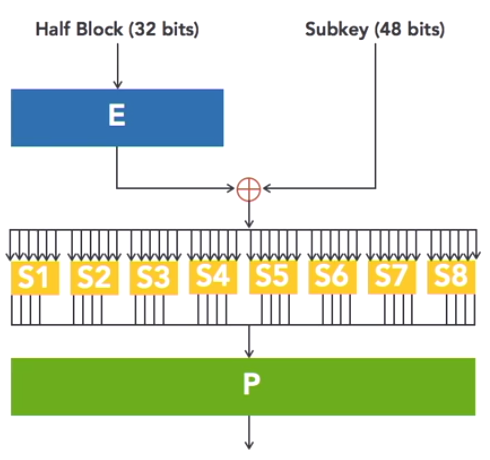 Remember, this happens inside each F box, so that has happens 16 times on any block of input.

No Longer Secure
DES was used widely throughout the government and the private sector for decades. But today, it is no longer considered secure. Mathematicians and cryptologists have published papers containing several effective attacks against the DES algorithm and it is no longer recommended for use.

When researchers discovered a DES was insecure, security professionals faced a dilemma. They had tons of old equipment designed to work with DES, but were no longer able to rely upon its security. While the government worked to adopt to the new advanced encryption standard, AES, practical security professionals around the world discovered a workaround. By using the DES algorithm on the same text multiple times, they could achieve greater security.

Option 1: All 3 keys are different. This is the strongest approach and results an encryption with an effective key strength of 112 bits.
Option 2: keys one and three are the same. This requires fewer keys, but reduces the strength of the algorithm from 112 bits down to 80 bits
Option 3: All three keys are the same. This emulates the standard DES algorithm and is just as insecure as that standard approach. It is included for backwards compatibility with DES, but is definitely not a good option

Triple DES is still widely used today and is considered a secure algorithm when used in keying mode one. The National Institute for Standards and Technology considers keying mode one secure for use through at least the year 2030.

The Advanced Encryption Standard, or AES, came as the result of a competition led by the National Institute for Standards and Technology. The winner was an algorithm called Rijndael which is now better known as AES. Like DES, AES uses a combination of substitution and transposition functions to achieve strong encryption. It is widely used today in many different cryptographic applications ranging from web security to encrypted voice communications.

You can run aescrypt on most platforms to encrypt files. https://www.aescrypt.com/

High-level description of the AES algorithm

Like DES and AES, Blowfish uses a Feistel network that combines both substitution and transposition operations. It is a completely public domain algorithm developed by cryptography expert Bruce Schneier in 1993 as a potential replacement for the Data Encryption Standard.

Twofish relies on a Feistel network for secrecy that combines substitution and transposition. It was one of the competitors in the AES competition that eventually lost out to the Rijndael algorithm.

RC4 is a symmetric stream cipher that was widely used to encrypt network communications.

RC4 was used in the following:

The algorithm reached an unfortunate tipping point in 2015 when security researchers demonstrated a series of fatal flaws in RC4. It is now widely believed that government intelligence agencies may have the ability to break RC4 encryption and most security professionals recommend against using the algorithm.

A Cipher Mode describes how an algorithm encrypts and decrypts data.

This is perhaps the most straightforward cipher mode. The algorithm simulates a digital codebook that provides an encrypted version of each possible input.

For example, if we have a message of 192 bits that we want to encrypt, and are using a 64-bit block cipher, the algorithm breaks the message up into three blocks and handles each of them completely independently. It takes the first block and uses the encryption algorithm to encrypt that block with the encryption key. That creates the first ciphertext block. It then moves on to the second block and encrypts it with the same key, and then repeats the same process for the third block.

If you encrypt the same block with the same key multiple times using ECB mode, you will get the same ciphertext each time. This is the key disadvantage of this mode, as it makes cryptoanalysis easier.

CTR mode performs the encryption a little differently. It begins with a plaintext, and two values. A randomly generated value, known as a nonce. And a counter, that begins at zero, and increments during each encryption operation. The value created by the nonce and the counter is then encrypted with the encryption key, and the resulting value is XORed with the plaintext to get the cipher text. When we get to the second block, the counter value is incremented to one, and we repeat the previous operation to get the second ciphertext block. And we then do the same thing for the third block, with a counter value of two to get the final ciphertext block.