There’s a lot of complex maths involved in creating that key pair, but the underlying principle that you need to understand is that a user selects two very large prime numbers that are used to create the encryption keys. After going through some mathematical computation, RSA uses the prime numbers to create a public and a private key.

As with any asymmetric algorithm, the user is then responsible for keeping the private key secure and distributing the public key to other people with whom he or she wishes to communicate.

The major drawback to the RSA algorithm is that it is fairly slow. Therefore, it is not normally used for exchanging long messages directly between communicating systems. Instead, RSA is often used to create an initial secure communications channel over which two systems exchange a symmetric key.

Phil Zimmerman created PGP in 1991. PGP is still widely used today and the details are still freely available for anyone to use through the OpenPGP standard. 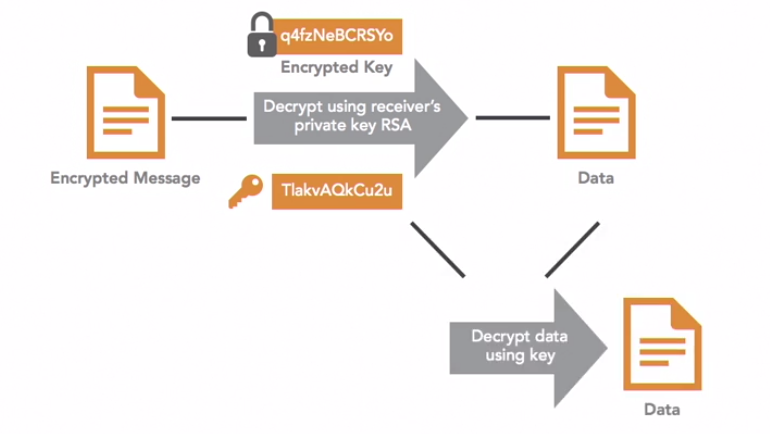 These are covered on the exam but are less commonly used.

Factoring some prime numbers can be easy, as in these examples:

But factoring larger numbers can be much more difficult:

Currently, there is no known effective way to solve the prime factorisation problem efficiently for large prime numbers. If someone discovered an efficient way to do this, all the cryptographic algorithms that depend upon prime factorisation would immediately become insecure.

Quantum computing is an emerging field that attempts to use quantum mechanics to perform computing tasks. It is still mostly a theoretical field. But if it advances to the point where that theory becomes practical to implement, quantum cryptography may be able to defeat cryptographic algorithms that depend upon factoring large prime numbers. Unfortunately, the use of elliptic curve cryptography would not provide protection against quantum attacks. At the same time, quantum computing may be used to develop even stronger cryptographic algorithms that would be far more secure than modern approaches.

Tor is a software package that provides an anonymous, secure way for individuals to access the internet. Tor also enables access to anonymous websites that are commonly known as the dark web. Tor, which stands for the Onion Router, uses encryption and relay nodes to hide the true sources and destinations of network communications. Tor is widely used in the security community, and was made popular by NSA leaker Edward Snowden when he used it to transfer secrets to the Washington post and other media outlets in 2013.

In this example, Alice, who wishes to visit the Washington Post, but doesn’t want that website to know her identity. She also doesn’t want anyone along the way to know who she is.

This preserves the anonymity of the communication, and enforces something known as perfect forward secrecy, or PFS

Perfect forward secrecy uses encryption to hide the details of the communication from the participants in the communication, ensuring that each node only knows the identity of the node immediately before, and after it in the process.

Tor also provides the ability to have two-way anonymity, so that the user doesn’t know the location of the website either. That’s a function known as ‘hidden sites’ in Tor. They have very strange URLs They use long, unique identifiers, and then end in .onion. An example is a service known as SecureDrop. This site is actually run by the Washington Post. It’s a hidden site on the dark net that allows sources who wish to send confidential information to the Washington Post to do so with complete anonymity. The SecureDrop service is an open-source package used by many different journalists, and from different outlets. It allows whistleblowers to communicate completely anonymously with them over the Tor network. Tor has its fans, but it also has its enemies.

Privacy advocates praise Tor because it does allow completely anonymous activity online. Law enforcement officials do not like Tor very much, because that anonymity may be used to hide criminal activity.