EG: Alice and Bob are trying to communicate secretly. Alice is going to create the key and send it to Bob

Methods of exchanging a key

This key exchange algorithm solves the problem of key exchange for symmetric algorithms. The algorithm was invented in 1976 by three cryptographers. It was based upon the work of Ralph Merkle and turned into a practical algorithm by Whitfield Diffie and Martin Hellman. Unfortunately for Merkle, his name was never included in the popular name used for the algorithm and we’re left with what’s called the Diffie-Hellman algorithm. 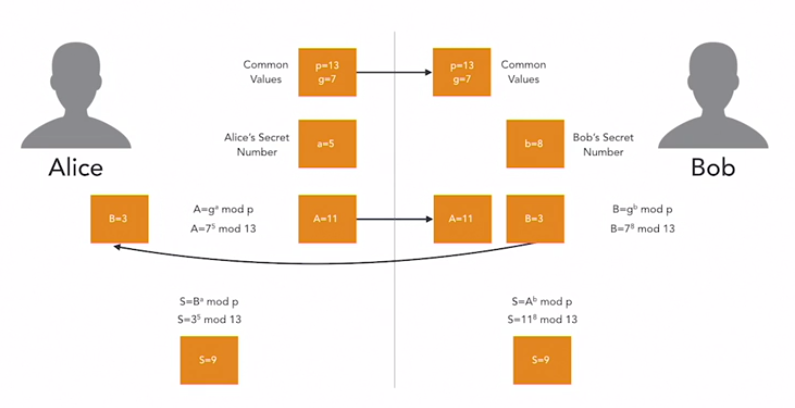 EXAM TIP: in reality the key values must be much higher which makes the maths and the algorithm much more complicated and secure

ECDH, algorithm uses a similar approach, but replaces the prime factorisation difficulty with complexity drawn from the elliptic curve problem. Diffie-Hellman algorithms use the concept of groups to describe key strength. Here’s a listing of the common Diffie-Hellman groups. The higher the group number, the more secure the use of Diffie-Hellman. Group 14 is the lowest numbered group that is considered secure. You should not use Diffie-Hellman groups with numbers under 14. 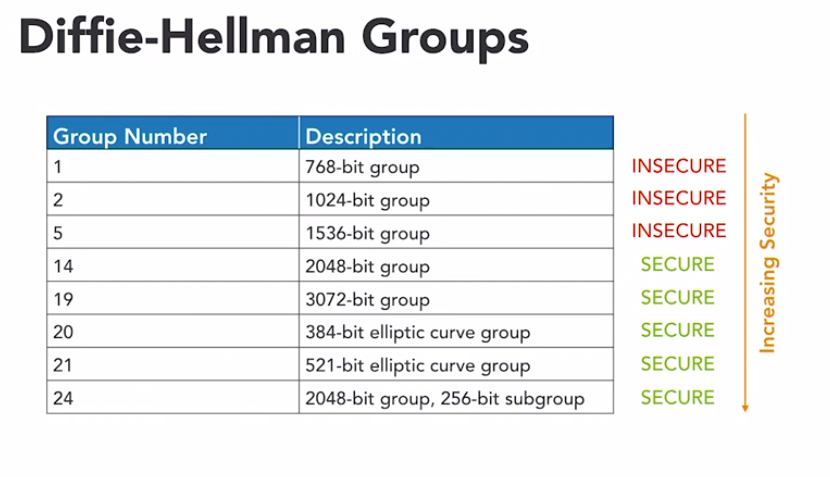 Key escrow is an arrangement in which the keys needed to decrypt encrypted data are held in escrow so that, under certain circumstances, an authorised third party may gain access to those
The idea is that government agents would have to obtain a court order before accessing escrowed keys, thus protecting the privacy of other individuals. While this may be a reasonable goal, there is not yet a reasonable way to implement this approach in a secure manner.

Perhaps the most concerted effort to deploy key escrow technology occurred in 1993, when the government proposed a technology known as the Clipper chip. The chip performed encryption, but also included a special law enforcement access field, or LEAF value, that allowed government agents to access the content of the communication. The Clipper chip caused a tremendous public controversy, as groups like the Electronic Frontier Foundation joined forces with security firms like RSA, to campaign publicly against the Clipper chip’s government back door.

In 2016, the FBI demanded that Apple assist in gaining access to an encrypted iPhone, that the government was using as evidence in a criminal investigation. Apple objected to this request on the grounds that weakening the security of the iPhone encryption software would jeopardise the security of millions of iPhone users.