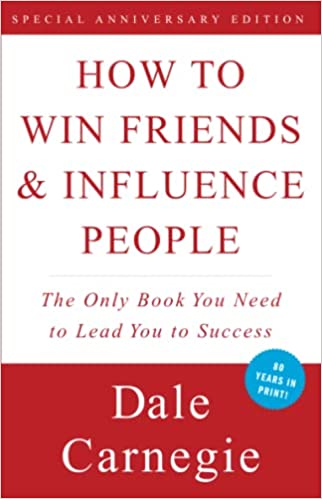 This one had been on my list to read for awhile as I had heard a lot recommendations for it. It had some good tidbits of information on improving your “people skills”. Below are a few of my notes from the book-

In technical lines, like engineering, about 15% of one’s financial success comes from engineering knowledge, the other 85% comes from skills I human engineering (personality and the ability to lead people).

The person who has technical knowledge and the ability to express ideas, assume leadership and arouse people, that person is headed for higher earning power.

Any fool can criticise, condemn and complain. But it takes character to be understanding and forgiving.

Instead of condemning people try to understand them. Try to figure out why they do what they do.

There is only one way to get someone to do something, by making them want to do it.

Principal: Give sincere and honest appreciation

The first man to earn a salary of 1 million dollars in America said “I consider my ability to arouse enthusiasm among people my greatest asset I possess, and the way to develop the best that is in a person is by appreciation and encouragement.”

Try leaving a friendly trail of little sparks of gratitude on your daily trips.

Principle: Arouse in the other person an eager want

The only way to influence other people is talk to them about what they want and how they can get it.

“Arouse in the other person an eager want. He who can do this has the whole world with him”

“if there is only one secret to success, it lies in the ability to get the other persons point of view and see things from that persons side” – Henry Ford

If you want to make friends, let’s put ourselves out to do things for other people, things that require time, energy , unselfishness and thoughtfulness.

Showing a genuine interest in others not only wins friends, but may develop in your customers a loyalty to your company.

A smile says: “I like you, I am happy to see you, you make me happy”. This is why dogs are a hit. They are so glad to see us they almost jump out of their skin.

It can’t be an insincere grin. That doesn’t fool anyone. People resent that. It has to be a heart-warming grin that comes from within.

People rarely succeed at anything unless they have fun doing it. Happiness doesn’t depend on outward conditions, it depends on inner conditions. Abe Lincoln said “Most people are about as happy as they make up their minds to be”

Principle: A person’s name is to that person the sweetest and most important sound in any language

Many top influencers and leaders put a lot of effort into remembering people’s names as they realise how important this is in winning them over.

People donate good money to hospitals, libraries, museums and Universities, so their names are remembered forever.

Most people don’t remember names because they don’t put the time and effort into it.

From the waitress to the senior executive, the name will work magic as we deal with others.

Principle: Be a good listener. Encourage others to talk about themselves.

People love to talk to someone who listens and encourages them to talk by asking the right questions. It puts them at ease and makes them feel important and liked.

A lot of times if someone has a complaint, it can be resolved by listening to them intently and then responding politely.

This principle applies for children and adults.

Some people go to the doctor just to have an audience.

Many people fail to make a favourable impression because they don’t listen attentively.

Principe: Talk in terms of the other persons interests

Learn what they are interested in and talk about that.

The true way to someone’s heart is to let them realise you recognise their importance.

Pass on this happiness and we will be rewarded.

Part 3: How to Win People to your way of thinking

Principle: The only way to get the best of an argument is to avoid it

If you lose, you lose it, and if you win it, you lose. Why? It will make the other person feel inferior . You have hurt their pride and they will resent you for it.

Disagreement can be good. “When two partners always agree, one of them is not necessary”.

When in a disagreement:

Telling someone they are wrong will never make them change their minds, but it will make them strike back.

If you are going to prove anything, don’t let anybody know it. Do it so subtly that no one will feel you are doing it.

Instead of saying “You’re wrong’, say “I thought otherwise but I could be wrong. If I am wrong I want to be put right. Let’s examine the facts”

Principle: If you are wrong admit it quickly and emphatically

There is a degree of satisfaction in admitting errors. It not only clears the air of guilt and defensiveness, but often helps solve the problem created by the error.

“Any fool can try to defend his or her mistakes, but it raises one above the herd and gives one a feeling of nobility and exultation to admit ones mistakes”

When we are right, let’s try to won people over gently and tactfully to our way of thinking, and when we are wrong, let’s admit our mistakes quickly and with enthusiasm.

Principle: Begin in a friendly way

“The sun can make you take your coat off more quickly than the wind. The kindness and friendly approach and appreciation can make people change their minds more readily than all the bluster and storming in the world.”

Principle: Get the other person saying “Yes Yes” immediately

When a person says “No”, their entire organism (glandular, nervous, muscular) gathers itself into a condition of rejection.

The more “yeses” you get at the outset, the more likely you are to succeed in capturing your proposal.

Principle: Let the other person do a great deal of the talking

Let the other person talk and tell you about their achievements. This makes them feel important.

Principle: Let the other person feel the idea is theirs

No one likes to feel that they are being told to do something or being sold something. We much rather feel like we are doing of our own accord or acting on our own ideas.

Letting the other person feel that the idea is his or hers not only works in business and politics, it works in family life as well.

Principle: Try to honestly see things from the other persons point of view

People may be wrong, but they don’t think so. Don’t condemn them, try to understand them. Only wise tolerant exceptional people do that.

Say to yourself “How would I feel? How would I react if I was in their shoes?”

Principle: Be sympathetic with the other persons ideas and desires

“Be above fools, try to turn their hostility into friendliness”

Principle: Appeal to the nobler motive

A person usually has two reasons for doing something; one that sounds good and a real one.

In most cases people will act favourably if you make them feel that you consider them honest, upright and fair.

Principle: Throw down a challenge

The way to get things done is to simulate competition. Not in a sordid way, but in a desire to excel.

If the work is exciting and interesting, the worker looks forward to doing it and is motivated to do a good job.

Every successful person loves the change for self-expression, the change to prove his or her worth, to excel, to win.

Part 4 — Be a Leader: How to Change People Without Giving Offense or Arousing Resentment

Asking questions makes an order more palatable and it stimulates the creativity of the person being asked.

People are more likely to accept an order if they had a part in the decision.

The following example is from a manufacturing company.

The General Manager had received a very large order that he knew was going to take a lot of extra work to fill. Instead of just ordering everyone to work harder and longer, he called a meeting of his workers and told them about the order, then he asked them:

The employees then came up with their ideas how to fulfil the order and took it on with a “can do” attitude.

Principle: Let the other person save face

If we are right and the other person is definitely wrong, we only destroy ego by causing them to lose face.

A real leader will always let the other person save face.

Principle:  Praise the slightest improvement and praise every improvement. Be hearty in your approbation and lavish in your praise

Inspire the people you come in contact with to a realisation of the hidden treasures they possess. This can literally transform people.

Principle: Give the person a fine reputation to live up to

To encourage someone to do a good job, give them a fine reputation to live up to.

Let the person know you have faith in their ability to do it, that they have a flair for it. They will then practice until dawn to excel in it.

Principle: Make the other person happy about doing the thing you suggest

Make them feel important and understand why they are doing it

Jocko Willink: Life is All Based On The Decisions That YOU Make. So Live a Good One